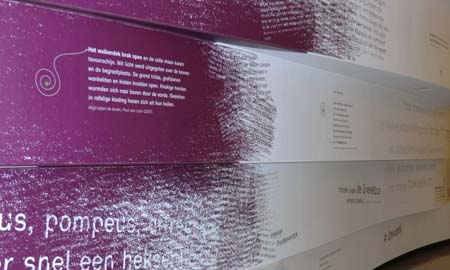 Typographic storytelling in Museum of Children’s Books, The Hague.

The interactive exhibition ‘Papiria’ of the Museum of Children’s Books in The Hague is offering an adventurous tour for children in the age of 7-13 years old. In this literary exhibition it is possible to create your own character through solving various questions and playing games about children’s literature. Besides that you must compete against ‘Inktvraat’, a so called beast gorging words and drawings. With a ‘slurper’ around your arm it is possible to save them. Children can create their own stories and comic strips online and are kept being informed about the struggle against ‘Inktvraat’.

‘I don’t know where I’m going but I want to be there’ – The image in the age of visual obesity. Last December 17th the symposium of the MOTI (Museum of the Image) took place in Paradiso, Amsterdam. In this 3rd edition of the yearly symposium the use of images and their meaning in the visual culture has been further explored.
The symposium addressed different functions of the image of today: the image as a social agent, as a biological process, as the playground of our imagination, as a cultural criticism, and as a revolutionary power.